Now for some HW on the RPi: A Sampler from the GitHub Repository dotnet/io

The .NET Core GitHub project djaus2/DNETCoreGPIO runs on the RPi, whether Raspian or IoT-Core (unchanged) to exemplify some of the hardware capabilities of the GitHub project dotnet/io. This uses Nuget packages from that project rather than direct dependencies.

A .NET Core app to run on the RPi. Works with both Raspian and Win10 IoT-Core unchanged. Exemplifies System.Devices.GPIO and Iot.Device.Bindings Nuget packages. Provided as Visual Studio 2019 project.

This is based upon the GitHUb Repository: dotnet/iot
Whereas the samples therein (from which this is taken, and extended) use library sources in that repository, this uses the associated Nuget packages.

Connect LED to GPIO17 and button to GPIO4 and Ground (to the one in between. ie Pins 11 7 and 9 respectively. 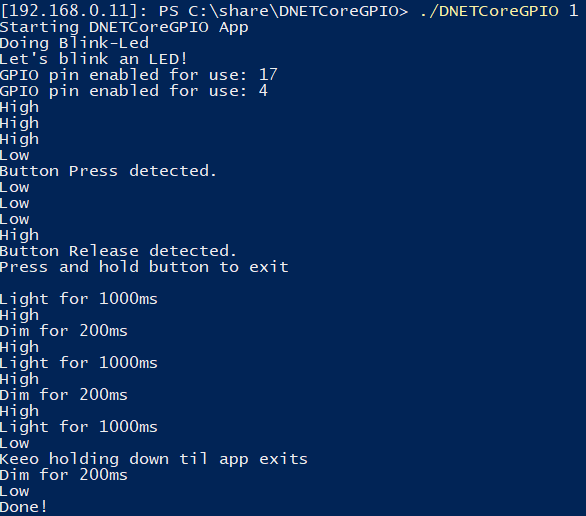 See circuit diagram under Circuits .
Active pin is is GPIO26. I’m using a 10K pullup to that.
Some conversions fail, which output as dots. 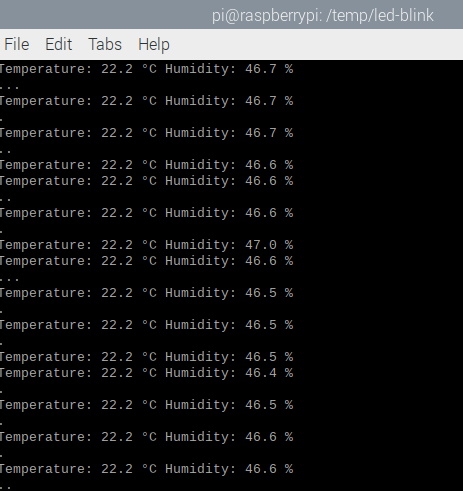 PS » Be careful with pinnout of the DHT22. I blew 2. As mounted on some versions, the Vcc and Gnd pins are the reverse relative to each other to what is on the actual device ( unmounted).

Run this from an SSH session or direct on the device (with kb and monitor). Not in Remote PowerShell. Remote PS does not facilitate user input in .Net Core Console app. Eg Console.ReadLine() does not pause it.

You need to Publish the app from Visual Studio for linux-arm or win-arm. You can publish to a share of the Pi, or build to a folder on the desktop and then copy or send it across.

NB: You could though build and deploy from VS Code.