az-iothub-ps is a PowerShell script that can create an Azure Group, IoT Hub, Device and Device Provisioning Service (DPS) requiring only their names, location and the Hub SKU. It automatically makes all of the Azure queries and posts from that info. The script can be used in a menu manner, or driven in one step from the command line. The script also generates Hub connection meta-information and packages it into a ps, sh and json files for transparent use by the Azure IoT Hub SDK Quickstart apps. The repository contains those Quickstart IoT Hub SDK .NET Core apps that have been reworked, extended and added to. Also, there is now has support for DPS and Azure Sphere, including the AzSphere command prompt as a PowerShell.

Wouldn’t it be nice to have ONE PowerShell script that prompts you for required information (Group, Hub name and Device name) when creating or selecting a Hub and for when collecting the required meta-data. Its output could be the required meta-data in temporary environment variables, ready for use by the Quickstarts. Look no further!

It’s here now. You run the main PowerShell script get-iothub in the PS folder. Whilst there are numerous other PowerShell scripts under PS in other folders, these are functions called by the main script. The script displays menus where the user makes selections or choices.

There is one other script that needs to be run once, set-path (run from the prompt in PS foloder as .\set-path ). You then can run the main script just by entering get-iothub as the PS folder is now in the System Path; but only for the life of the shell. set-path only needs to be run once for a new PowerShell terminal.

The Azure IoT Central capabilities have been removed from this branch of the repository. They are though still under development in the IoT-Central branch of the repository. You can clone that by adding --branch IoT-Central to the git clone command. You might also want to add --single-branch as well to the git clone command. The iot-central branch functionality is a superset of the functionality in this branch,except for some tweaks in both branches which will be merged, adding the Azure IoT Central functionality to the iot-central branch.

Having problems running PowerShell scripts that you have downloaded, for example the ones from here, because they are unsigned. I’ve created a new GitHub repository djaus2/sign-me-up-scotty that can create a local signing authority, create a personal certificate for code signing, and sign an individual PS script with that certificate. And for repository downloads like this, it can recursively sign all PS scripts in a folder and down from there, as well as recursively unsign them! 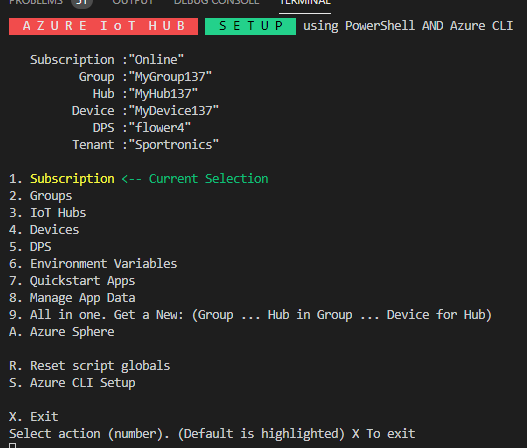 Reminder: run-ui is a graphical UI frontend to az-iothub-ps.
It runs as PowerShell script The Quickstart projects and their apps

Read more on my blog http://www.sportronics.com.au